Below are a few of birds from different colour that I bred over the years.

A visual violet is for a lot of people one of the brightest en best colours you can get on a budgerigar. I can only agree.

The violet factor is present in a few main birds but mostly not visually.

Preferable in violet or another dark factor.

I do like the colour gradient that is typical for the fallow. They are not yet up to a decent quality: a challenge.

By accident I discovered fallow hiding in a few of my birds as splits. I've kept breeding with the splits to normals so fallow kept under the covers until I revived it in 2012. I will develop a colour line: CL/FAL.

More on fallows on Fallow budgies.

I do like a nice cinnamon, especially with a dark factor added to it to counter act the paler body colour.

Cinnamon is ubiquitous in the main line. Even in my entire stud you need to look hard for a bird that doesn't carry the cinnamon factor. 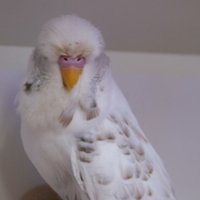 When it comes to pieds the Danish pied is by far my favourite.

Danish pied was hiding in my stud from the start due to the original VAYF hen from partnership Heylen-Waerzeggers.
From 2012 I've started to develop them slowly.

Other colours in the stud

Though perhaps not a colour in the 'mutation' sense of the word. I do like a good normal light green. We see far too few good light greens on the show.

In the stud I haven't bred that many normal light greens.

Blue is present in a high percentage in the main line, though mostly combined with other colours like grey.

I'm not a fan of this yellow face variety. The double factor can be attractive though.

I'm not a big fan of opaline. Perhaps because opalines tend to be more flecked. A clean real opaline could possibly be a nice bird.

Opaline is present in a high percentage in the main line. It will probably diminish as I'm trying to control flecking. But with possibly my best bird being opaline cinnamon it will stick around for a while. 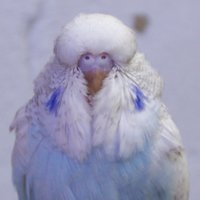 I find a good marked spangle a beauty to the eye.

Spangle and I just didn't seem to mix until I bred very well with an outcross double factor white spangle. Later another spangle outcross was added with good results but I've never aimed at breeding spangles. Now that Stefaan specialises in them lots of my spangles have gone his way. 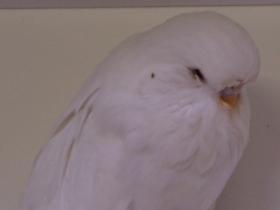 Getting rid of all the undulating marks could be seen as denying the budgerigar, but I do like a few buttercup yellow red-eyes.

Though I had the odd ino there is to my knowledge nothing left in my stud. Stefaan specialises in them so he got what was left of my ino's.

I can't really see the attractiveness of the Australian pied.

Due to a grey cinnamon pied WDGPC from William Dierickx this pied variety has crept in my stud. Though I only have the odd one in the breeding cage.

When I first started with budgerigars as a boy, I prefered the greys. Now I feel the greys and grey greens are rather a dull colour.

With the addition of several grey factor carrying birds into my stud, there is now too much grey.